For most, slavery is not a contemporary concern.  But what about for the men in this video?

If you’ve ever been to an auction, you’re familiar with this scene.  An auctioneer rattles out prices, which climb higher with each round, until the product in question is finally sold to the highest bidder.  The lucky winner then goes home with a new watch—no, wait.  A new car.  No.  Wait.

A new human being?

Although it may seem outlandish to us, that is exactly what’s taking place in this video.  Taken by an undercover CNN reporter in Tripoli, Libya, the video captures an off-screen auctioneer shouting out prices to a group of assembled buyers.  The product?  Living, breathing human beings.  Specifically, a group of young men that the auctioneer describes as “big strong boys for farm work.”  As the footage continues, a Nigerian man is sold to the highest bidder for a price equivalent to $400.

This man is a slave.  This video was recorded in 2017.  This, ladies and gentlemen, is modern day slavery.

According to Article 1 of the 1926 Slavery Convention, slavery is defined as:

“The status or condition of a person over whom any or all of the powers attaching to the right ownership are exercised.”

While some forms of modern day slavery that I explore on this blog post are less clear-cut, the selling of humans for labor plainly complies with this definition, which is one of the reasons I decided to start my discussion here.

Kevin Bales, author of Disposable People: New Slavery in the Global Economy, identifies three basic forms of modern day slavery: 1) chattel slavery; 2) debt bondage; and 3) contract slavery.  The case of the young Nigerian man and the other men being sold at the 2017 slave auction falls under the category of chattel slavery.  This form of slavery is what most people think of when they think of old slavery in the United States.  It means that slaves are seen as “actual property that [can] be bought, sold, traded or inherited,” as defined by Fight Slavery Now.  Here’s more information about chattel slavery in Libya.

We’ve grown up reading about this stuff in history books.  We’ve grown up thinking, “Thank God that’s over.”  But again I ask you: what about the men in this video? 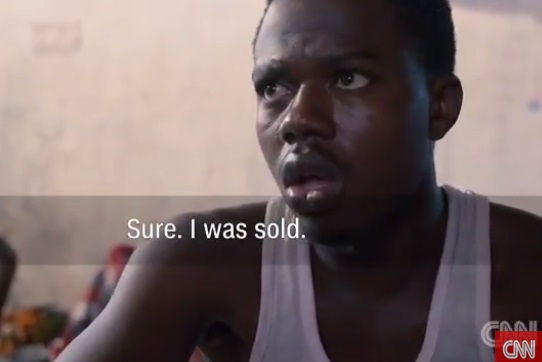 Boys, really.  Boys in their twenties.

What if your brother, son or boyfriend was one of them?  Imagine if someone you loved was being sold as property through no fault of their own, by an accidental chance of birth.  Imagine if your loved one was condemned to a lifetime of exploitation and abuse.

I imagine you’d act.  Of course you would.  You wouldn’t stand for a living, breathing, feeling person being treated in this manner.  You just wouldn’t.

Martin Luther King, Jr. once spoke the famous words, “Injustice anywhere is a threat to justice everywhere.”  Nowhere do these words resonate more than in the shadowy world of modern day slavery.  Horrible acts of injustice taking place in far corners of the globe threaten the humanity of every single one of us.  Let’s stand up.  Let’s take action.

Below are three organizations that are actively working to end modern day slavery. Click these links to learn more about getting involved.

With so many terrible things happening in the world each day, it’s easy to become overwhelmed.  One of the most difficult aspects of the fight against modern day slavery is convincing people that everyday people can make a difference.

What’s the best strategy for bringing modern day slavery to the forefront of public consciousness?  Leave your thoughts in the comments section below.